Today I combined my ROBYN'S FETISH CHALLENGE with SMEARED & SMUDGED Monthly Sketch Challenge.  I did so with an Image from Robyn's Fetish Challenge blog's SPONSOR:  GINGERLOFT DIGIS
The prize this week for the winner is 3 digis of the winner's choice from Gingerloft

ROBYN'S THEME this week:
MAKE IT SPARKLE
here is the Digi from GINGERLOFT:
she's called "Fire", but I used her here for FIRE and Ice
Here is the Sketch from SnS:
I made it as a two-sided, Gothic Arch Triptych
Here it is: 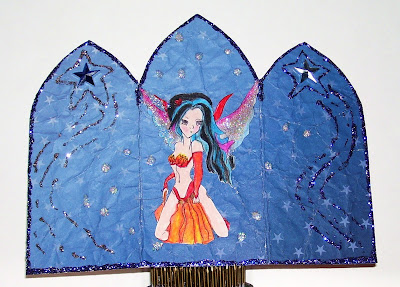 The front: Our Fairy is among the stars of the Cosmos, on some older PROVOCRAFT paper, where the deep blue background with stars fades into the center with a lighter shade (I used one lower area of the paper, so you get some of the Hombre effect. I crumpled up the paper before gluing it to my card stock base.  I edged the entire Triptych with Starry Night Stickles by RANGER, then Glued down the fairy in the center panel, which was colored with my PRISMACOLOR pencils, and blending pencil. Once all that was dry I went ahead and attached 2 star jewels to the tops of the outer panels, and used Silver Stickles (with the dark blue star) to trace a "star" ring around it, and squiggly lines to look like a shooting star, and I did the same on the other panel with a pale blue star and Starry Night Stickles. Once that was dry I used Star Dust Stickles on the fairy's Large wings and on some of the stars here and there on the paper. 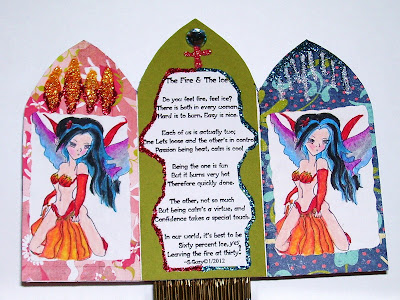 The Back: I used a piece of printed paper with shades of red on one outer panel, and blues on the other. Then chose a piece of solid card stock, in a color that was in both panels. The card stock is STAMPIN' UP, the printed papers are--Blue; K&CO.."K-ology:Addison", Red; BASIC GREY "Olivia".
I printed 2 slightly smaller images of the fairy, colored her the exact same way, trimmed her up glued her to each outer panel.
Then it sat idly by waiting for the words to come to me for a small poem based on Woman, being both Fire and Ice.
It is called "The Fire & The Ice", I printed that out on white card stock, trimmed it and glued it to the center panel. Using Red, Orange and Yellow Stickles I made "Flames" above the one outer fairy, and Aqua and Frosted Lace Stickles over the other fairy as Icicles. Once this was all dry, I edged one half of the poem in Red, and the other with Aqua Stickles. Then glued down a light blue round jewel above the poem, as the top part of the symbol for "woman" the bottom part of the symbol is Fruit Punch Stickles.
The poem on MY triptych had some errors that I fixed, after the fact...so it is slightly different from the version I saved. Here is the final revision:
The Fire & The Ice

Do you feel fire, feel ice?
There is Both in every woman,
hard is to burn, easy is nice.

Each of us is actually two;
One Let's loose and the other 's in control.
Passion being heat, calm is cool

being one is fun
but it burns very hot
Therefore quickly done.

The other, not so much
But being calm's a virtue, and
Confidence takes a special touch.

in our world, it's best to be
Sixty percent ice,
leaving the Fire at Forty.
~S. Guzy © 1/2012
I hope you like MY SPARKLY creation for this week's challenge  at ROBYN'S FETISH Challenge Blog. I simply LOVE this fairy image from GINGERLOFT!!
Please come join us this week, with YOUR Sparkly Creations!
Remember, the winner will receive 3 digis from GINGERLOFT of the winner's choice.

Entered in:
Stamp & Create ...anything goes