Each day for the next 17 days, I will be sharing  either some legends, myths, devotions, my own thoughts perhaps a recipe or 2 on my blog for Aisha's YULE Blog Party at By The Broomstick. 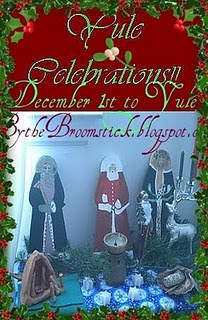 Please visit the other blogs that are participating(above)

I am still a newb, learning. Therefore any legend, myth, devotion etc. will be coming from someplace I read it, and I will be giving credit to the right people.

ADDITIONALLY, I have a small gift tree that has a some ornaments on it, but it also has 21 little gift bags or envelopes that are numbered 1-21.  Each day I will pick a winner from the comments for that day.  These giveaways are priced from $1-$5, and there are a few are like booby prizes...I am doing this FOR FUN!!


EASY RULES:
*be a follower
*tell me something about that day's post that means something to you, or touches you etc.
*list your name
*pick a number from 1-21*  (*each day obviously there will be numbers listed as OUT, it will be your responsibility to pay attention to each day's posts, to see the number that is no longer available)

From Patti Wigington, your Guide to Paganism / Wicca
Yule isn't just a time for stuffing yourself with food and burning a log. There's a lot more to it, and this time of year is full of rich tradition and legend. Today, we'll look at some of the folklore, customs and mythology that surrounds the winter holidays. We'll talk about the magic of mistletoe, the deities of midwinter, naked carolers, and even the fat guy in the red suit!

A modern Druid blesses Christmas mistletoe in a celebration Tenbury Wells, England.
Image © Christopher Furlong/Getty Images 2005
Mistletoe as Medicine:
In 50 C.E., the Greek physician Dioscorides wrote his Materia Medica, establishing himself a place in medical history. As one of the ancient world's most knowlegable herbalists, Dioscorides found that mistletoe helped cure his patients of external tumors. He wrote that it “has the power to disperse, soften, drawing and assisting tumors of the parotid gland and other lesions…” Some forty or so years later, Pliny the Elder wrote of the treatment of sores and epilepsy with mistletoe in his Natural History. He also described its use in magic and ritual.
The Druids and Abundance Rituals:
Pliny wrote that Druid elders performed rituals in which they harvested mistletoe -- a botanical parasite -- from oak trees with golden sickles. It was collected under a waxing moon phase, and then fed to animals to guarantee their fertility. As part of the rite, a pair of white bulls were sacrificed, and if prayers were answered, prosperity would be visited upon the villages.
Those Wild Romans and Saturnalia:
No one loves a party like the ancient Romans, and their festival of Saturnalia is one of the most well-documented celebrations of the Winter Solstice. This week-long bacchanal included exchanging of gifts, lots of food and wine, dancing and music. Slaves got the week off work, courts were closed, and all kinds of debauchery took place. This festival honored Saturn, of course, and he was an agricultural god. To keep him happy, fertility rituals took place under the mistletoe. Today, we don't quite go that far under our mistletoe (at least not usually) but it does explain where the kissing tradition comes from.
Jesus and the Naughty Mistletoe:
As the Roman Empire crumbled and Christianity spread, a rumor began in France that the cross upon which Jesus died was made of mistletoe. As punishment for its involvement in the crucifixion, the plant was forbidden to grow out of the earth, and was demoted to being a botanical parasite. It now has to have a host plant, such as the oak or the ash, apparently more well-behaved and virtuous trees.
Mistletoe as Medicine Once More:
During medieval times mistletoe was again recognized for its medicinal properties, and appears in several folk remedies. To ward off demons, twigs of mistletoe could be hung in bundles over a door. In some countries, springs were placed in the stable to protect livestock safe from local witches. Mistletoe was also known to rural people as the best cure for barren women; in fact, mistletoe seems to have been a cure-all for any problems with conception, because early societies were baffled by its method of propogation. Interestingly, the Cherokee people used the North American strain of mistletoe as an abortaficient.
Mistletoe as a Parasite:
The plant we know today as mistletoe has no roots of its own. What it does have is tiny extensions called holdfasts, that grip onto the bark of the host plant. They also serve as a sort of umbilical cord, and suck the nutrients from the host. Because of its dependence on the host, mistletoe is only found on living trees. Mistletoe plants can be either female or male; only the female has the beautiful but highly toxic berries.
Grow Your Own Mistletoe:
Because mistletoe is a parasite, you can grow your own fairly simply -- as long as you're willing to sacrifice another plant as a host. The kind available in the stores at Christmas is harvested while immature, so don’t bother trying to use those berries as starters for your plants. Instead, wait until spring, when you can pick some plump, white, mature berries.
Be sure to get one from a host plant similar to the one you wish to use as a host for the new growth. Choose a hardy branch on a healthy mature tree, and make a few small incisions in the bark. the further up you can go, the better -- it allows for more sunlight to reach your seedlings. Remove the skins from the seeds, and place them inside the tree bark. Cover the seeds with some jute or other protective covering, or you'll end up with a big bird feeder and no mistletoe.
Plant lots of seeds, because you need both males and females to propagate the new growth, and only about ten percent of seeds actually germinate properly. It takes about five years, but eventually your mistletoe will reach berry-producing size.
Remember, mistletoe berries are poisonous. Consuming large quantities of leaves or berries can be fatal – especially to young children, who have been known to ingest berries. If someone is suffering from mistletoe poisoning, get them to an emergency room -- do not try to treat this yourself. Mistletoe should not be used by nursing moms or pregnant women.
The great thing about mistletoe is that if you use it magically, you don't have to worry about taking it internal. Considering all of its wonderful magical properties, it can be used in many different ways.
Posted by Susan at 7:35 PM

Some very interesting stuff about mistletoe! I think I will pass on trying to grow it though.

Hello. Firstly, let me say love your name! Secondly, thanks for the info on mistletoe. Very interesting. I love your giveaway idea! The number I pick is hmmm....9.